Showing posts from December, 2008
Show all

December 16, 2008
"Archaeologists excavating a Ming dynasty tomb have called in experts after being baffled by a discovery of a watch ring with 'Swiss' engraved on the back. The archaeologists are currently working a documentary with two Shangsi journalists, and are puzzled as to the origins of the timepiece. It is thought that the site had not been disturbed since its creation four centuries ago.

Watches, before their inexpensive miniaturization in the 20th century, were mostly pocket watches, which often had covers and were carried in a pocket and attached to a watch chain or watch fob. Watches evolved in the 1600s from spring powered clocks, which first appeared in the 1400s.

Either time travelers use "Swiss" watches, or someone was in the tomb before that these archaeologists didn't know about. But i kinda doubt that people from the future would accidentally leave somet…
Post a Comment
Read more 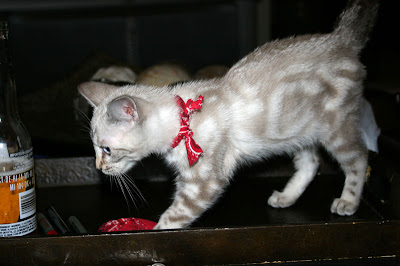 Freaking love him.  I've been reading up on Bengles, they have Indian, (from india) wild tiger cat in them. He walks like a panther, and he sleeps on me. His type of Bangle, the snow marble ones, are the only cats in the world that get a "glitter" coat, so i'm kinda excited for that. You're suppose to be able to tell if a cat is a bangle blindfolded cause their fur is so soft. So far he's slept like 90% of the time, but he's still a baby so I guess thats ok.
Post a Comment
Read more
More posts