Mona on the Moon 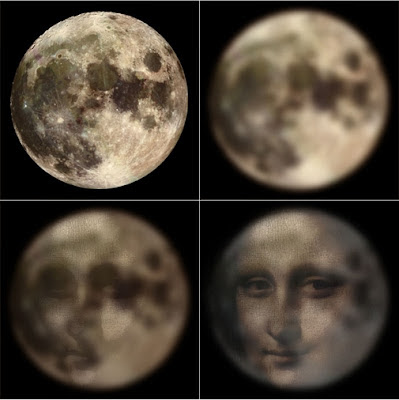 Normally I would think this would be a little bit too far fetched to believe but curiously before I saw this picture and read about it, I had thought something similar. On my way up to Vegas one time It was a full moon but I could see it during the day. I thought the craters and things reminded me of a face of a sad woman! Ever since then I would always see the same face on the moon. This is actually very possible, since Da Vinci said to make glasses to see the moon closer - so he was definitely looking at the moon. Mona=Moon? I dont know but I thought this was interesting!
I also think it's really weird that we only see one half of the moon at all times, yet it's suppose to be spinning, and we're suppose to be spinning. That kinda freaks me out! not to mention that the shadow of the earth covers the moon perfectly during an eclipse. It doesn't seem like these things would be just coincidental yet I can't think of a meaning? It's almost as if the Moon, The earth, and the Sun are in a certain proportion to each other, which implies some other force at work during their what would point to "creation" or a structured evolution? I'm going to find out what the numbers are and compare them and see what happens!
mona lisa moon

D said…
Supposidly it does spin, but in such a way that we still only see one of it's side. So the earth and moon are spinning together in a way at just the right speeds that it doesnt' look like it is. At least that's what they say!
November 5, 2007 at 12:59 PM