If there was a line, I crossed it. 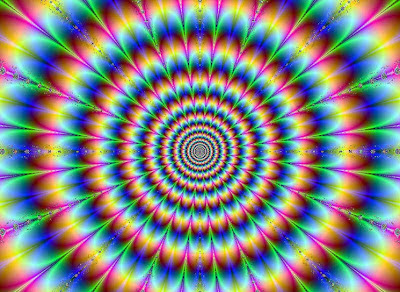 I've spent the last two days finally working on the visual sidekick to my book. It's going to explain things a little better and have all the really cool images i've made over the past year. It'll be like "where's waldo" for 2007 via art from 1500 haha. But you wont know what waldo looks like, or if he's there!

As I was putting the book together and writing the descriptions that go with the different images I kept putting even more things together. I've come a long way since the first night I stared on all this crazy stuff, yet i'm finding that the majority of this past year was actually trying to explain the first 3 nights.. All the thoughts and theories that seemed almost impossible at the time have been unraveling ever since. I'm kinda amazed that the theories I pulled out of no where, have been mostly right! Weirrrd. My best explanation is both simple and complex at the same time. It's basically how your brain works - well for some of us. When you look at something new your mind tries to figure out what it is, how it got there, if it's dangerous, if you can eat it, if it's pretty - etc. Like if you were to look at a bird that flew down in front of you, you would automatically try to figure out what kind of bird it is. The same goes with seeing a stranger, or looking at a painting. You analyze it and try to figure it out.

So when we look at the Mona Lisa our brains do the same thing. How the hell did he make it? As you focus on it more and more and think about it, you'll eventually figure it out. In the process you'll also learn a lot about vision and painting - pretty much everything it takes to undersatnd how someoen could turn dabs of paint into the worlds greatest work of art, a painting that we still can't figure out how he painted it!?

So when I saw pictures pop out like stereo grams inside of the Mona Lisa and found other paintings that combined with her, the path was clear - to figure out not just HOW he did it, but why? - that's basically what my life consisted of for the last year. Trying to figure out if i was crazy, or crazy perspetive! Although I am a little crazy, I'm even more perceptive!

I'm re-thinking the idea that I have aspergers. Autism and Aspergers are names for disorders. If you think about it, what makes someone autistic and almost autistic is just a label. Someone could have all the strenghts of someone with that kind of brain wiring, without the disorders - but there isn't a label for THAT. and THAT is what i am, i think. haha I'm "autistic" but not autisic.. like. i'm wired to be that way, but not enough for it to be a disorder! Dammit, I have to re-write that chapter now!

I'm actually really impressed with myself for once! I wrote over 80 pages in a day! and finished the bulk of my book in 2! It's 240 pages! That's a lot of work to do in a day. It makes up for the month I spent doing almost NOTHING. I guess that's just how i work. After i finish this book, which i'm still contemplating the title: Sfumato Gallery, Do you see what I see?, or something else/hmm. I'm going to update my site, re-write some of Discovering Da Vinci's Daughter, and then start my fiction book! woo hoo. The first one is going to be called: Faces of Gold! It's going to be really cool If I can figure out how to write fiction. I've only ever writen one thing that was fiction and that was an alternate ending to Romeo and Julliete freshman year of high school. Mrs. Mcknight said I was going to be a great writers someday, I just had to work on my spelling, grammar, and not use such short and choppy sentences. I defiinatly dunt use short sentences, but spelling and grammar are still lacking, yet getting better everyday! YOu can't always judge an author by his spelling dag nabit. Kinda like a preview for my fiction book. It's going to be like a creation myth/ how a world and it's people come into existence

What else what else? I'm getting a lot of really cool emails from really cool intellectual people! I'm like: woo hoo i'm not alone! I even got an email today from the first person to ever buy my book! She said my honesty was inspirational and she's glad to hear someone saying what she's been thinking! I get that a lot. I dont really have that TMI or tact filter. If there's a line, i'll cross it. I have to try so hard to hold back what's really going on in my head. I'm kind of an ass hole sometimes. I'm becoming just like my Grandpa (rip) he was such a genius growch. But as i'm getting older i'm understanding why - people are idiots! Whenever I hear that commercial that says "people are smart" i'm like wtf, yeah right! since when? What is it, like 1/10 people are even at the level of understanding to read news articles and understand them? hahaha

But speaking of which i'm currently completely Drama free! It took a lot to get here and I defend it religiously! The biggest purpotraitor is this little part of me inside that likes to remind me of bullshit! I piss myself off so much. I'll be sitting here in a great mood, singing along to my music, writing or playing WC3 and then all of the sudden a little whisper goes off in my head. Dammit Drama-Derek! Shut up! and i'm getting better and better at silencing my humanity. It's great. I want to be like the Dali Lama and control my thoughts and shit. It's my head and i'll think about what I WANT! Right? Why can't I do that? I guess I can! The question remains, are my thoughts out of habit, or regret? But yet they are clouded in bitter anger? maybe it's just a coping mechanism or something? hmm. I guess sometimes you can be mad at yourself for feeling something you can't prevent. You're like. Shit I want it to stop, but yet what's required for it to stop, would most likely just make it worse? Or maybe it's because what would make it better, wont happen either? hmm

oh oh! I have my first inverview for a news paper tomorrow morning! And a radio inverview next week! wooo woooo